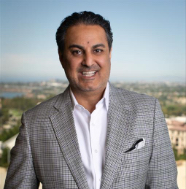 Ike Suri is currently the Chairman and CEO of Pelican Point Investment Group LLC (“PPI”), a boutique Private Equity & Merchant Bank in Newport Beach, California. He also serves as the Chairman of Fundingshield, LLC , a loan level fraud prevention company for handling the funding process which mitigates fraud perpetrated by closing agents. Prior to PPI, Ike was the Co-CEO and Co- Founder of Pelican Point Capital Partners, LLC for three years. . He also has served as a CEO, Chairman, board member and adviser to private and public companies and continues to advise companies as an adviser, principal & owner/operator. Ike is a “serial entrepreneur” and founding charter member of The IndUS Entrepreneurs (TiE- South Coast). He served as a board member of Trilennia Group, a mid-market merchant banking firm and a member of the Turnaround Management Association (TMA). Ike is a Co-Founder and was Co-President and CFO for Options Group, a leading Wall Street-based executive search and consulting firm with offices in 11 countries. Ike served as CEO and Chairman of Paradise Multimedia, Inc., a spin-off acquired from Phillips Corp. of NA. He also served as Chairman and CEO of Pacific Rim Entertainment Inc., a prime-time animation production company of which he sold select assets to Disney.
Ike originated structured and integrated acquisitions in 6 technology consolidation/roll-ups in the networking spectrum and related industries. From networking technologies in Ethernet, Token Ring, switches, routers, fiber optic codecs (applications) and wireless synthesizers, his team acquired these companies from companies such as Raytheon, Rockwell Network Systems, Westinghouse, Meret Optical, Sciteq, Relialogic and Phillips.
He was part of a leadership team for acquisitions that helped build Sorrento Networks. Sorrento Networks reached a market capitalization of approximately $1.6b as a listed Nasdaq company. Ike was instrumental in helping the company acquire 8 companies in the roll-up strategy and further spun off 2 subsidiaries as separately listed public companies called Entrada Networks & DPI.
Ike is also Managing Director of Azemuth, Inc., a Suri family office making principal investments since the mid-1990’s. His primary focus has centered in building enterprise value via investments and by Mergers & Acquisitions. He has a long history of working with leading organizations across various industry sectors including Financial Services, Real-Estate, Information Technology, Med-tech, Health Care, Food and Beverage and Social Media.
Ike attended Delhi University’s Sri Ram College of Commerce and further completed Undergraduate and Graduate course work in Finance and Marketing at Rutgers University. 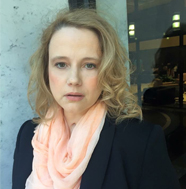 Jaclyn (Berrie) Suri has an extensive background in theater, film, television and modeling. From a young age, she has graced the stage in shows such as Les Miserables, Joseph, Grease, Anything Goes and many others. She has credits in numerous TV shows such as Law and Order, Michaels Hayes and John Stewart's "You Wrote It, You Watch It". She has modeled for Raybans, Escada, IW Harper Bourbon, Teen Spirit and Vidal Sasoon. She has been seen in magazines such as Glamor, Modern Salon and other international media. Jaclyn attended the Long Island High School of Performing Arts. She further attended NYU's Tisch School of Performing Arts with a double major in Psychology. She won the "Seymore Weiner" scholarship for her winning montage of " Judy Garlands Born in a Trunk". She also attended The Lee Strasberg Institute for many years. After moving from Manhattan to LA she continued her passion in the entertainment industry by working on numerous projects for well known producers and directors at Paramount Pictures. Now a mother of twins boys Kabir and Jaik Singh Suri, she continues to work passionately as a writer, editor, actor and producer of films. She is an avid supporter of organizations and charities such as Crohns & Colitis, Short Gut syndrome, Autism and was a former President of Adoption Crossroads in Manhattan and Make a Wish Foundation. 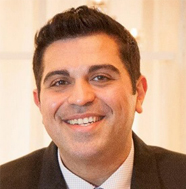 Adam J. Chaudhary is currently the President of Pelican Point Investments Group LLC (“PPI”), a boutique Private Equity & Merchant Bank in Newport Beach, California. He also serves as the President of Fundingshield, LLC, a loan level fraud prevention company for handling the funding process which mitigates fraud perpetrated by closing agents, compliance with state closing requirements and adherence to regulations. Prior to PPI, he was the Managing Director for Pelican Point Capital Partners, LLC., Vice President at Royal Bank of Scotland (RBS) responsible for US Dollar structured funding and managed the cross asset solutions team. In these roles, he developed and executed secured borrowings and capital solution products and oversaw the development of interest rate, FX, equity, credit hedging and alpha products for banks, insurers, hedge funds and specialty finance companies. At RBS, he also conducted the successful workout and renegotiation of a USD 9 billion loan portfolio while living between London and New York and also worked with Her Majesty’s Treasury risk consultants in defining the scope and need for portfolio insurance products.
Previously, Adam was a trader in the Fund Derivatives Group at Greenwich Capital where he risk managed a USD 5 billion portfolio of loan and derivative products secured by fund equity for global hedge funds & fund of hedge funds. He was Summer Analyst at Goldman Sachs in the Fixed Income Currencies and Commodities Division on the structured credit correlation marketing and structuring team. Adam also served as a project manager for GreenPoint Credit, a sub-prime mortgage servicer focused on chattel and manufactured housing loans, where he developed cost analysis models used by the then treasury team and head of securitization.
Adam is an avid fan of global music and a percussionist by hobby and has begun to take steps to combine these passions with charities including Development in Literacy (DIL) which promotes increasing literacy rates and women’s education in Pakistan. Adam holds Series 7 and 63 licenses from FINRA and obtained a Bachelor of Science in Finance and International Relations from Bentley College in Waltham, Massachusetts. He has also obtained certificates in credit products & derivatives from the New York Institute of Finance. 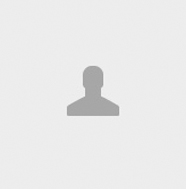 Alan Cole-Ford is a corporate executive with a distinguished career in the fields of media, technology, and finance. He served as Executive Vice-President of MGM/United Artists Inc. and was an integral part of the management team responsible for the turnaround and successful sale of the studio on behalf of its owner, Credit Lyonnais. Previously, he had held series of senior staff and operating posts for over a decade with Paramount Pictures Corp. including Senior Vice-President of its Entertainment and Television Groups and later as Senior Vice President of its parent company, Gulf + Western until its successful sale to Viacom. Following his Hollywood Studio tenure, he served for two years as CEO of NVST Inc., a Seattle-based private equity research firm and Draper, Fisher, Jurvetson affiliate, and in 2005 became a senior partner with Hong Kong-based Stone Drum Capital. He has played a key role in the development of eChinaCash Inc., a Beijing-based marketing services company which is partnered with Sinopec, China's largest oil&gas retailer and the country's largest SOE (state-owned-enterprise). Since 2008 Cole-Ford has served as eCC's Chief Operating Officer and a member of its Board of Directors. He is also a Board Director of Mei Ah Entertainment Group, a publicly-traded Hong Kong-based media conglomerate with film production, theater, and content distribution holdings across China and other Asian markets. 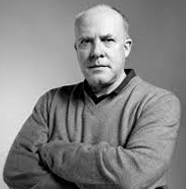 Cassian is Hollywood’s premier independent film producer. Having produced hundreds of commercially and critically successful films, both as a truly independent producer and as the head of the William Morris Endeavor independent film division, Cassian’s experience and expertise is unmatched in the small to medium budgeted independent film space. Cassian is the Co-CEO of Golden Gate Pictures. Additionally, Cassian maintains some of the strongest relationships with domestic and international sales agencies and distributors. Bob Berney from Picturehouse will lead distribution for Golden Gate Pictures projects. 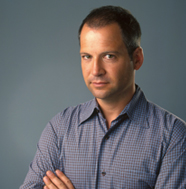 Brad Epstein is a prolific Hollywood producer with more than two decades of solid feature film and television production experience to his credit. Prior to being an independent producer, Epstein served as a senior level studio executive, having spent the last half-decade as the Senior Vice President of Production for Disney’s Buena Vista Studios. Mr. Epstein had direct involvement in such high profile releases as “Confessions of a Teenaged Drama Queen,” starring Lindsay Lohan, “Ladder 49” starring Joaquin Phoenix and John Travolta as well as “Invincible,” starring Mark Wahlberg.
Prior to joining Disney, Epstein oversaw production at Robert De Niro’s Tribeca Productions working on such films as “Wag the Dog,” “Analyze This,” and “Meet the Parents.” Additionally, he severed as an executive producer on the NBC miniseries “Witness to the Mob,” “Holiday Heart” for Showtime, as well as co-created and oversaw the London musical “We Will Rock You” based on international rock band sensation Queen. Epstein also executive produced the stage musical “Sisterella” in collaboration with producers Michael Jackson and Robert De Niro. Prior to that, Epstein spent three years working as president of production at Renny Harlin’s production company where he developed “Die Hard 2,” “The Adventures of Ford Fairlane,” and “Cliffhanger.”

Epstein has served as producer on “About a Boy,” starring Hugh Grant, “Dan In Real Life,” starring Steve Carrel and Juliette Binoche, and “Ghosts of Girlfriends Past” starring Matthew McConaughey, Jennifer Garner, and Michael Douglas. In television, Epstein was the first producer ever to secure the rights to CAL FIRE, which aired as a 6-part docu-drama show with the OWN network under the title “Lives On Fire.” Most recently, Epstein recently sold “Smother” to NBC Productions and USA Network and THE PETTY’S, a 12-hour limited series to TNT/Sony Tv starring Tim McGraw. On the motion picture front, Epstein is in development on such high profile pictures as “Antwan Jefferson’s Bar Mitzvah” which Epstein is co-producing with Dan Fogelman (writer of CARS and CRAZY STUPID LOVE) and P.Diddy attached to star; “Fuddy Meers” written by Pulitzer-prize winning playwright and screenwriter David Lindsay-Abaire and to star Marissa Tomei, David Tennant and Ellen Burstyn; Girl X based on the bestselling novel ANNE FRANK AND ME. Sophie Nelisse ( THE BOOK THIEF) is attached to star. Epstein is making his directorial debut starring Russell Peters and Faizon Love , based on an original screenplay by Billiam Coronel and Epstein. It is being independently financed with shooting to begin July 2015. Epstein is the former Co-Owner and Executive Producer of the Bellator Fighting Championships, a professional mixed martial arts competition that debuted in April 2009 on ESPN Deportes. In addition, Epstein directed the personal story segments for each of the 50 MMA fighters who participated in the competition For ESPN. Epstein is a graduate of Emerson College where he received a BA in communication. 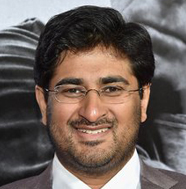 Sriram Das formed Das Films in February 2007 th create a development and production company focusing on adapting literary properties into feature length films for the independent marketplace. Currently, Das Films has more than twenty projects in various stages on developement. Das Films' first productio, VERONIKA DECIDES TO DIE, Directed by Emily Young and starring Sarah Michelle Gellar, was produced in 2008. Sriram's first film, PREMIUM, was released by Universal in 2007, starring Hill Harper, Zoe Saldana, and Dorian Missick. He went on th co-produce BLUE STATE starring Anna Paquin and Breckin Meyer, which premiered at the 2007 Tribeca Film Festival, and was released by MGM in February 2008. Prior to entering the film business, Sriram was an Associate at Merrill Lynch in New York, working for the Structured Solutions Group dealing with inequity derivatives. he graduated cum laude from Harvard University with a BA in Social Studies and received an MBA from Yale University.